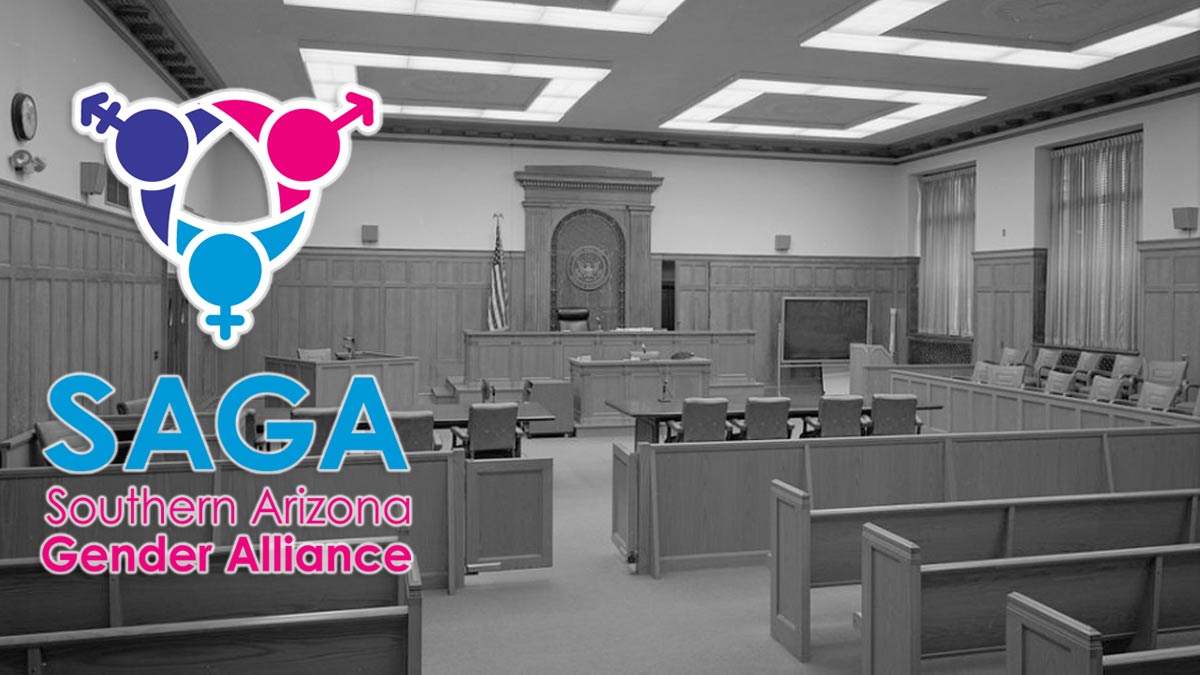 Name changes have become pretty much a routine process over the twenty years I have worked with SAGA. My own took about 30 minutes in 2002. So it is more than a little unsettling when a court decides not to grant a name change for someone in our community.

Such was the case in Yuma County Superior court on February 20th of this year. On that day, a trans man in Yuma filed the court provided name change petition form. We know how this goes, and we know it is a slam-dunk approval. But on February 26, 2019, the judge denied the request "with prejudice as the Petitioner has failed to show good cause."

In this context, "with prejudice" apparently meant that the judge was not willing to entertain any arguments challenging his decision, so it could only be challenged by appealing to a higher court. So we did.

"Failing to show good cause" in this instance probably means that the judge refused to grant the name change without proof of surgery, something this judge has done before. (We convinced the judge to reverse a prior denial for lack of surgery.) The judge did not even hold a hearing before deciding on their own to deny the petition. (For those who like new terms, the legal term for what the judge did is "sua sponte." I just learned it today)

The trans man in question contacted us through our name change site and long time SAGA Legal Director Abby Jensen coordinated and helped to file an appeal to the Arizona Court of Appeals in March.

The results, in Abby’s words, are-

"Today, the Arizona Court of Appeals ruled that a trial court judge abused his discretion by denying a trans man's name change petition for lack of "good cause." The Court ruled that Arizona's name change statute (ARS 12-601) does not require proof of good cause. In addition, the Court held that the fact a person seeks a name change to facilitate gender transition is not grounds to deny a name change request."

This decision is now the law throughout Arizona, so judges everywhere are barred from requiring proof of "good cause" for name changes, and from denying name changes just because it is part of a gender transition.

A copy of the Appeals Court decision can be downloaded at  https://bit.ly/2RiT4QS. The official reporter citations are not yet available.

I want to express our deep gratitude to Abby for her hard work  on this appeal, and a special thank you to Molly Brizgys of the ACLU of Arizona for her help.

This case shows the significance of the work we do as an organization and as individuals. One or two people can start a process, get involved in a process or support that process and make an impact.

This is just one of many stories of how SAGA has worked behind the scenes to change the system and improve life for all trans people in Arizona over the past 20 years. The decision will help us to support trans people all over Arizona when they run into unsympathetic judges in the future.

By Erin Russ, SAGA Director of Programs | Pronouns: she, her, hers